Dealing with My Neck Pain

I think what most surprises me about working at OSC is how many people say to me, “I’m not going to see an Orthopaedic surgeon…all they want to do is cut on me to make money!”  I can tell you for a fact that in all but the most extreme circumstances, surgery will NOT be the first, second or even third treatment option you will be given.  In fact, the OSC doctors are very conservative and seem to try other therapies before recommending surgery. 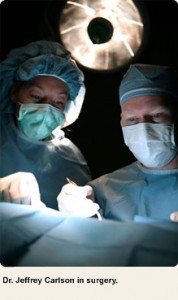 This is exactly what happened in my case.

Dr. Jeffrrey Carlson reviewed my MRI with me and then told me my treatment options.  I honestly expected him to recommend surgery and I was fine with that, IF it would provide relief.  However, I was somewhat taken aback when he first suggested physical therapy and treatment with prescription anti-inflammatories.  By this time, I had been in pain, which was increasing in severity, for almost 3 years.  I was ready to do anything to feel better.  But, I took his advice and began Physical Therapy.  I also continued taking my medication.  I was in therapy for several weeks and noticed no improvement, in fact, my pain seemed to be getting much worse…almost intolerable.

I was seen again by Dr. Carlson and again, expected him to recommend surgery.  NO, he instead suggested another treatment, an epidural steroid injection.  I have to admit, I was afraid of this….I hate shots!  I know, name a person who loves injections and I will sell you some ocean-front property in Oklahoma!  But, I REALLY hate to get a shot…so much so that I pass out cold.  I have to lie down to get them and sometimes I still pass out.  I have a bad history of this and it was not comforting at all to think about this happening in front of all of the people with whom I work.  However scared I was, I decided to trust Dr. Carlson and give it a try.  I was in so much pain at that point that I really did not care, I just wanted to feel better.