After my initial examination by an orthopedic associate at OSC I had my MRI, which was not unpleasant at all.  Many people become claustrophobic inside enclosed spaces, but the MRI at OSC is open in the back and on the sides (an “Open MRI”), so it certainly doesn’t not make you feel as claustrophobic as one of those “tube” MRIs might make you feel. 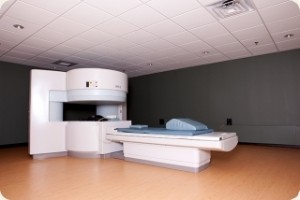 I checked in for my appointment and was told to change into a gown, but that I could leave on everything from the waist down.  I put my clothes into a locker.  I was then escorted into the MRI room itself.  The machine is kind of imposing-looking, but our MRI technicians are so warm and friendly, they put you right at ease.

They told me that I would be able to talk to them at any time and that if I had a problem during the MRI, that I could let them know. I was told to lie down on a table that was attached to the Open MRI itself.  They put a bolster under my legs to make me more comfortable and gave me a blanket.  They told me that the table on which I was lying would move into the actual MRI and that when inside, I would need to lie very still. All I had to do was find a position for my hands that would be comfortable and one where I could hold my position without wanting to move.  They also asked me if I would like to listen to music and even put on the kind of music I liked!

Once I was comfortable, they pushed a button and the table moved me inside of the MRI machine.  Lying face up on my back, the top of the machine was about 6 inches from my face, but the sides were open and I could feel cool air coming from behind my head, where the machine was also open.  They asked if I was okay again and then said that they would start the test.

The MRI tech left the room and went to sit in a windowed control room where they could operate the MRI and watch me at the same time.  They talked to me over a speaker that I could hear inside the MRI and said for me to cough or clear my throat and then to be still for about 10 minutes.  Soon  after, they told me I would hear some noises and that the test was beginning.  The noises I heard were not scary, but kind of funny.  One of the sets of noises I heard was kind of like a horse clip-clopping, then I heard a variety of noises, some metallic in nature, some kind of like a beat from a New Wave 80’s Band!  I love music and enjoyed listening to all of the different sounds.  It didn’t frighten me or annoy me at all…I found it to be most entertaining!

After about 10 minutes, they told me I could cough or clear my throat and then I had to be still again.  This went on for about 30 minutes and then the test was complete.  The MRI tech came into the room, pushed a button  and my table moved out from the MRI machine.  I got up, got dressed and was finished with my test in less than 1 hour.  The experience was not painful or difficult in anyway.

Having an Open MRI at OSC was convenient and easy!