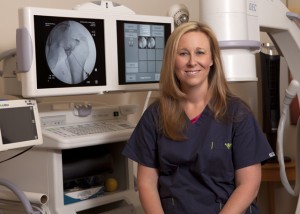 I usually spend a great deal of time asking my patients questions, doing a physical exam and ruling out other possible conditions, before settling on a diagnosis of FMS.  Why?  Because, until now, there hasn’t been a specific diagnostic test that could give me a definitive answer.  The exciting news is that researchers have developed a blood test that seems to be a starting point.  I wanted to give you my assessment of both the new test for FMS and the treatment being developed so that you can make an informed decision about both.

The new FMS test uses biomarkers found in the blood and appears to be able to distinguish FMS patients from other patients with Lupus, OA (Osteoarthritis) and RA (Rheumatoid Arthritis). The test makers say they found biomarkers specific to FMS which are not found in lupus/RA patients. This would not then exclude a patient from having lupus or RA in addition to FMS, if the FMS test was positive.

Fibromyalgia has been a diagnosis of exclusion. This means that other conditions like lupus are excluded as the cause of the symptoms before diagnosing FMS. A targeted test would allow for quicker diagnosis and targeted treatment. The problem I see is that many patients with lupus/RA/OA also have FMS. Therefore patients with suspected FMS would still need a complete work up including testing for other conditions, even if a specific test for FMS exists.

Fibromyalgia is a medical syndrome, which means there are many signs and symptoms that may be present.  The spectrum of patients with this condition range from those who predominately have depression and fatigue to patients with completely normal moods and just body tenderness, and anywhere in between.  It is likely that the test will be able to determine patients in a specific subgroup of FMS, but unlikely to diagnose all forms. More research and actual patient testing will need to be done to determine the level of its usefulness in the patient population.

To me, even more exciting than a new way to diagnose FMS would be to have an effective treatment option for the problem. If a specific biomarker has indeed been found, then treatment could be targeted and potentially be curative, instead of only symptom-based amelioration. The BCG vaccine, originally used to guard against Tuberculosis, may be tested for treating FMS. The concept is that FMS patients have lower cytokine/chemokine levels, which affect immunity. Cytokines and chemokines are peptides; small proteins that are important in sending signals between cells, especially in the immune system.  The BCG vaccine could boost the cytokine/chemokine levels. This would be exciting because it could be a treatment targeted at the actual problem causing Fibromyalgia, instead of symptoms.

This treatment however would likely be limited to what spectrum of FMS patients actually have the lower levels of the cytokines and chemokines.  You also would have to assume that the cytokine/chemokine abnormalities are the cause of the pain, fatigue, sleep abnormalities, etc. and not a result of some other aspect of the disease, including the drug treatments and/or the pain itself. I would be very cautiously optimistic that at least some patients may benefit from this treatment being studied and developed.