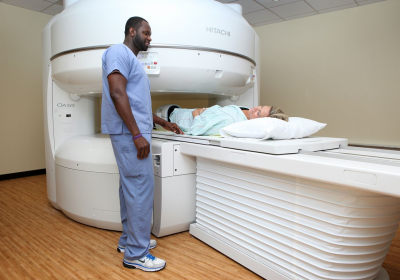 MRI or Magnetic Resonance Imaging, is used by physicians as a diagnostic tool to view parts of the body which cannot be imaged by X-ray or other types of diagnostic imaging. Before discussing the merits of Open MRI, a discussion of MRI scanning in general is warranted to provide understanding.

In layman’s terms, all MRI scanners use a superconducting magnet (containing many wire coils, which have extremely low resistance, through which electricity is passed) to create an electromagnetic field. Radiofrequency waves from another magnet, or coil, are sent into the patient’s body, allowing the water in the body tissue to be visualized and the resulting image to be captured. Because the body is almost entirely comprised of water, every part of the body can be seen by the MRI, but is it especially useful for imaging soft tissues which cannot be seen by x-ray. This electromagnetic field can be adjusted to different frequencies, depending upon the area of the body being scanned and the amount of contrast that is needed.

While postulated about and experimented with as early as the 1950s, the world’s first true MRI was created in 1972 and was first tested on a human for diagnostic purposes in 1977. In 1980, scientists teamed with GE to purchase a huge 1.5 T (Tesla) magnet and created the first commercial MRI, able to be mass-produced and marketed around the world. Two men, Paul Lauterbur from the United States and Sir Peter Mansfield from the United Kingdom, were co-awarded the 2003 Nobel Prize in Physiology/Medicine, for their work, first dating the 1970’s, to create what we now know as the modern MR scanner.

MRI units are made up of a variety of components, including a powerful computer system that controls the magnets and electric frequencies used to create the images, the body of the machine itself and a sliding table on which the patient will be moved into position for imaging. There are also a variety of coils (magnets) used for imaging specific body parts. These small coils can be placed around the shoulder or knee, for example, to allow for a better image to be obtained. The coils look similar to medical braces used for support in those patients with orthopaedic issues and do not cause discomfort to the patient while wearing them.

The complex technology used to create the MRI scan allows an unparalleled view of the human body, with images available in 3-D, available in cross-sections and as well as regular 2-D images. Physicians have the ability to manipulate the images to achieve a better look at a particular area in which they have interest. The use of a contrast agent may be ordered by a physician who wants a more-detailed look at a particular part of the body. The injectable dye can be admitted intravenously to highlight areas of inflammation or directly into a joint (arthrogram).

Because all MRIs utilize magnets and electricity to produce images, a great benefit of having one is that the patient is not exposed to ionizing radiation, as they would be with a common x-ray or with a CT scan. This makes the MRI one of the safest diagnostic procedures to have for most people. However, the benefit of using magnets for imaging present a real danger to those who have metal implants in their bodies, such as pacemakers for heart arrhythmias , cochlear implants for hearing loss, heart valves, metal implants in the brain, eyes or ears and ports for infusions (catheters). The powerful magnets can cause these implants to move and can be lethal to those with pacemakers or artificial valves. MRI can be used safely with other forms of implants; such as hip and knee replacements and dental implants. If you have any form of implant or have sustained an injury where it was confirmed or suspected that you may have shrapnel in your body, you must inform your healthcare provider BEFORE you have an MRI scan.

Anyone who has had an MRI is familiar with the variety of clicks, clunks and electronic noises generated by the scan. Is there a reason the scanners have to be so noisy? The noises are caused by the enormous forces that pass through gradient coils of the scanner. Today’s newer machines do a good job of dampening those sounds by the use of strategic soundproofing; however, most MRI techs will pipe in music to the MRI area to distract the patient from scanning noises.

MRI scanners have been designed historically so that the patient and the magnet were in proximity, thereby limiting the amount of “wiggle room” the patient had in the scanner. The first MRI scanners had a long, tubular area into which the patient had to lie to be directly under the magnet for scanning. This lack of space caused problems for anyone with claustrophobia, those who were taller or obese, or for those persons who had difficulty staying in one position for long periods of time. Because so many people found being in the enclosed space of an MRI to be challenging, the designers and manufacturers of these machines soon decided that the scanners needed to be made more comfortable and more open. The next generation of scanners provided more space and less a feeling of being totally “surrounded” by the machine. Today’s scanners are available in a variety of configurations to accommodate most patients.

Currently, MRI scanners are available as closed, open, upright and extremity scanner models. Closed scanners have the tubular opening or “bore” into which patients must enter lying flat on their backs to have images made. The open MRI scanner will have either an open back, expanded sides or be entirely open on all sides, with the magnet being suspended over the MRI table. The Open MRI also has a table upon which the patient lies, which is positioned in the machine according to the scan required. However, with an Open MRI, the patient can be supported by pillows or have bent legs to add to their comfort, depending upon the scan required. An upright MRI scanner allows the patient to sit during their scan. An extremity scanner can only be used for limbs, hands and feet.

While the newest OPEN MRI units provide much more room for patients, persons who suffer from claustrophobia may still need sedation to be able to withstand the enclosed space of an MRI, no matter how open it may be. Patients who have difficulty lying still due to pain or a neurologic disorder, such as Parkinson’s or Restless Leg Syndrome, may also require sedation and/or pain medication to be able to withstand being scanned. Even the most powerful MRI scanners require at least 20 minutes to capture images and some patients find it impossible to be still for that length of time.

Open MRI does allow enough room for support pillows and props to be placed to provide more comfort for patients. Open MRIs can accommodate most tall, large or obese patients; however, patients over 700 lbs. may have difficulty finding a scanner that has capacity for them, outside of a hospital. Another advantage of OPEN MRI is that there is more room for air to circulate around the patient. If a patient is hot or cold, the MRI tech can direct air conditioning or heat toward the patient to provide for their comfort.

Open MRI is the scanning option of choice for most patients. It is more comfortable, spacious and quiet than traditional closed units. It can accommodate most large or obese patients. It provides a much less enclosed scanning environment for those patients who suffer from claustrophobia.

If you have been told that you need an MRI, please feel free to contact us at Orthopaedic & Spine Center for more information or schedule an appointment with us.