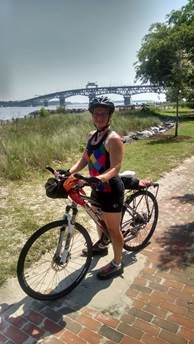 My name is Sherry L. Miller and I am a 55 year old female who had been suffering for over two years with arthritis in my hips. I started seeing Dr. Burrow two years ago due to the pain and progressive difficulty in walking. Dr. Burrow tried several non-surgical approaches over the time, but in the end we decided that it would be best to proceed with full hip replacements.

I had never had major surgery, so I had a fair amount of apprehension about going into the hospital. I talked with Dr. Burrow and with other people who had the procedure, and everyone reassured me that it would resolve my pain and disability. It is an understatement to say that Dr. Burrow gave me my life back!

Before the hip issues, I was an active endurance cyclist, some days riding up to 100 miles. Two years ago I started to notice that something was wrong. I began having a hard time putting my leg over my bike. I thought I just needed to stretch and work out more. I continued to ignore the pain and loss of motion, which never went away. I reached the point where I could barely get on my bike, and then I finally reached the point where I was in constant pain and could barely walk. During this time, I tried seeing a chiropractor but he said he could not help. I made an appointment the next day to see Dr. Burrow at OSC.

Dr. Burrow’s started treating me with muscle relaxers, but they provided very limited relief. He stated that the hip issue was not going to get better, but that I should keep moving no matter what. My mate often reminds me how I would wake up in the middle of the night in tears because the pain was so bad. There were times during the night where I would run bath water as hot as I could stand, it just so I could relieve the pain long enough to sleep a couple hours. I am a special education teacher, and when I was at school colleagues would stop and ask me what was wrong. There was one time someone said that I walked like I was 80 years old. I went back to Dr. Burrow, and the next treatment course was a prescription for Celebrex and I started receiving shots in my hip to relieve the pain. Some people are helped by the shot for many months. In my case, it helped the pain for about 2 weeks. I received a shot every 3 months until I had surgery.

My family and friends often say they had no idea how much pain I was in because I never complained. As time went on I realized that I could not go on this way. I was exhausted all the time and I started to rethink the option of surgery. When Dr. Burrow discussed the surgery with me, he explained how medicine has changed over time and people as young as their 30’s were getting hip replacements. I actually met someone who had a hip replacement and they shared their story with me. On my next visit to Dr. Burrow’s I told him I was ready for surgery, but that I was scared. He told me to go home and discuss the procedure with my mate and then we made a decision. We both knew it was time.

At my next visit with Dr. Burrow, we planned for surgery. He was very receptive to my questions, and encouraged me to talk to people. He also said I could call if I had any questions or concerns. I can tell anyone who reads this, that Dr. Burrow is a great listener and explained everything to me so that I was able to fully understand the procedure. As the time for my surgery approached, my condition got progressively worse. I could barely walk, and I was hunched over and could not stand up straight. I waddled when I walked and it was often said I walked like a penguin. It brings tears to my eyes when I think about all I went through.

Some people thought my hip condition was due to the number of miles I logged as a cyclist. Dr. Burrow reassured me that it was not due to the cycling, and that the exercise actually allowed me to stay mobile. He reiterated that the problem was not due to anything I had done, but rather the onset of the arthritis. Over the space of three months, I had both hips replaced. It turns out that I had put off the surgery for so long, that the arthritis had destroyed a large amount of bone in my hips.

Surgery wasn’t easy, but it was more than worth it. I was actually up and walking around in 1 to 2 days after surgery, and the pain was finally gone! During the surgery and recovery process, Dr. Burrow worked with me and he also kept my mate informed at all times. If there was an issue, Dr. Burrow was always available. The nurses who work with him were also awesome. I missed a total of 12 weeks of work and had 12 weeks of rehab. There is no way to tell you how much the surgery has meant to me, and Dr. Burrow is a wonderful surgeon and a great person. I was extremely motivated to get better, and I followed Dr. Burrow’s orders exactly. Even though sometimes it still hurt to stretch and do PT, I worked through it, knowing that I was already getting better.

Even though I was initially terrified at the thought of surgery, I knew I had the greatest team in the world supporting me. I have a wonderful man, many loving friends, and the best hip surgeon in the world (at least in my opinion)! My scars are healing wonderfully, and I am proud to show them off as a sign of where I have been.

It is now 10 weeks after my last hip replacement, and I just completed a 41 mile bicycle ride to Gloucester and back, including the climb over the Coleman Bridge. We are already planning for our annual 150-mile bike trip on a trail from Pittsburgh, PA to Cumberland, MD over the eastern continental divide. I am pain free, and all of the wonderful aspects of my life have returned. I am looking forward to many, many more years of cycling, traveling, and living life at its fullest. Again, all I can say is “Thank you Dr. Burrow!!!”

Dr. Haynes replaced my left knee in January 2015. It was one of the easiest surgeries I have ever had (including my right knee replacement). After the surgery, I was not groggy, nor in pain until later during the night, but by that time even that was not severe. I was standing ( with help)… Read more »