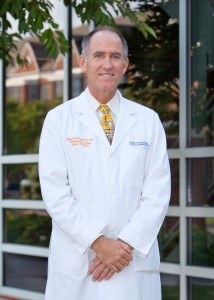 I would like to share my experience with a surgery performed by Dr. Haynes. I had been “putting off” Carpal Tunnel surgery that I should have had done years ago. Needless to say, I let it go long enough, that I have been told that I do have some nerve damage that is irreversible…that was my stupidity. I got to the point that I couldn’t sleep more than an hour or two at night without having my hand and arm wake me with pain shooting throughout from my armpit to the end of my fingers.

Dr. Haynes operated on my right hand on Thursday morning. I could tell immediately it was going to be a great relief to not have the pain that I had constantly had for the last few years. I kept it elevated until Saturday and flexed my fingers often. I have been doing just about anything that I wanted to do, boating, cutting and splitting wood, working in my shop, etc. I have slept well every night since the surgery and continue doing well.

I urge anyone that needs this surgery to get it done, do not put it off until you are in constant pain. It is such a simple solution to such a major problem.

Dr. Haynes performed a carpal tunnel surgery on my left hand on a Thursday morning. I am a musician and was able to rehearse guitar the following Monday and played a show the following Friday and Saturday nights with no problems at all. AMAZING!!! Dr Haynes answered all my questions and the surgery went perfectly. I only took a total of three of the prescribed pain pills the night of the surgery and the pain was minimal. I recommend this surgery and Dr. Haynes to anyone suffering from carpal tunnel syndrome. Don’t put it off!
Joseph Davis France

Hello everyone! My name is Bruce and I’ve lived in Portsmouth, VA for 25 years or so. I was born and raised on Long Island, New York. After the Marine Corps and Viet Nam, I settled in Richmond, Va. and graduated from University of Richmond in 1975.

Overall, I’ve led a pretty rough and tumble life, convinced of my invincibility! Around 40, my daughter, Heather Elizabeth, was born in 1989. I had a son, Brian Bruce, in 1971, so I was no rookie to the dad-deal: wrestling, pitching ball, riding bikes, jogging, touch football, etc.

Well, surprise, surprise. I found re-curing hiccups in my abilities. Big Bad Bruce turned into Sweet Lumbering Brucie! First, the spring in my legs went. No problem, says I, some squats at the Y will take care of that. Well, the Y turned into Why? So, I never went. Then the knees and then The Hip! Started off as an easy limp. Being a veteran, I immersed myself into that maze. After 8-10 years, it became apparent they were not interested in replacing Brucie’s knees. Meantime, Carpal-Tunnel had arrived and fate intervened. The VA didn’t want to do that either! They gave me the option of getting the Carpel-Tunnel done on the Outside. By good fortune and word of mouth from other lumbering souls, I found Dr. Haynes.

After the Carpal Tunnel Repair was done, I asked him “Do you do hips too?”. “Absolutely”, he says. By this time, I could barely walk. My hip would clunk when I walked, I fell, then could hardly get up, etc. People started opening doors, carrying boxes, asking if I was going to make it. GAWD! A strapping US Marine Veteran humbled in such a way.

Dr. Haynes to the rescue again!!! Jiffy-Hip, standing up same day, even made it so I was standing straight again. I love this man. My knees are next at “The One-Stop Body Shop”. He’s my hero and everyone I know in Tidewater to Richmond to New York knows it! Thanks DOC. I’ll go to combat with you anytime!

Dr. Haynes and staff literally saved my vacation this summer.

I had carpal tunnel syndrome in both wrists. I had surgery in my right wrist by a another Doctor in the Richmond area, back in the year 2000. Back then, it took 6 to 7 weeks before I could use my right wrist. For that reason, I kept delaying the surgery on my left wrist.

During the early part of the summer of 2014, my left wrist began getting worse, to the point it woke me up a lot at night and I couldn’t hold things in my left hand. Our family had a big vacation planned at Hilton Head in June. I didn’t want this condition to ruin our vacation. So I went to the Orthopaedic and Spine Center and met Dr. Haynes and the wonderful staff. Because my vacation was a few weeks away there was not enough time to perform the procedure, so we decided on a cortisone treatment and that was a wonderful short-term treatment that saved our vacation. I had full use of the left hand, with very little pain at night.

Upon returning from vacation, I immediately scheduled the surgery. The procedure was much better than the one I had on my other wrist in 2000. I had the Endoscopic Carpel Tunnel Surgery performed by Dr Haynes which, believe it or not, has only a 3-4 day recovery time. I was at full use within 4 days. What an awesome experience. The staff did an outstanding job making feel comfortable and explaining things. I highly recommend Dr Haynes and the folks at OSC…they are very professional, put the patient first and have a world-class outfit.

A few years ago, my family doctor sent me to Dr. Haynes for carpal tunnel syndrome. I had surgery and had no problems. Therefore, after a few months when my shoulder was hurting, I went back to see Dr. Haynes. An MRI revealed a torn rotator cuff. We started with shots, but when they no longer worked, I chose to have surgery. Dr. Haynes explained what would happen during surgery. On the day of surgery, he reassured me that everything would be fine and it was. There were no complications. The only difficult thing was learning to do things with my left hand (I am right-handed) while my arm was in a sling for three weeks. After three weeks, I began physical therapy. It was hard at first, but the staff encouraged me to keep working on all the exercises and it wasn’t long before I was able to move my arm without difficulty. I would highly recommend Dr. Haynes and the entire staff at OSC.

After thirty-five years of employment on typewriters and computers, I was diagnosed with Carpal Tunnel Syndrome. The numbness was so severe, it woke me up to find some comfort. After an appointment with Dr. Haynes, he suggested surgery.

On September 5, 2013, Dr. Haynes performed surgery. The numbness was immediately relieved. I did not need pain medication. The surgery was a real success. Thanks to Dr. Haynes and his staff. Dr. Haynes is very knowledgeable of the procedure and I got immediate relief.