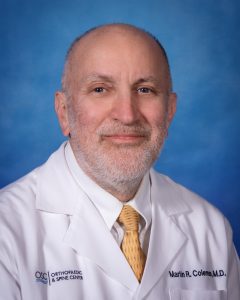 Dr. Martin Coleman is very knowledgeable, has a lot of experience, and made me feel there was no doubt the surgery on my shoulder would be successful.

It has been almost two months since my surgery and I’m already feeling better than before. Thank you, Dr. Coleman!

Gail injured her shoulder while working out. She found relief through surgery with Dr. Martin Coleman at Orthopaedic and Spine Center.

If you need to have rotator cuff surgery I highly recommend Dr. Martin Coleman. I had surgery on Nov. 2, 2020. I had done my research and discovered that Dr. Coleman was the best shoulder surgeon on the Peninsula. After discussing the surgery with several of my friends that had already had rotator cuff surgery and researching the doctor they used, I knew I needed the best because “I don’t do pain” very well.

I made the right choice. I have had very little pain. The first month my shoulder/arm was a little sore, but very tolerable. I was amazed after hearing the horror stories of many of my friends’ experiences with other doctors. Trust me, if you do exactly what Dr. Coleman tells you to do, you will not have any problems. He’s very knowledgeable and cares about his patients. He’s a no nonsense type of doctor. But don’t let him fool you, he’s very kind, caring and will “break character” with a genuine smile once he sees your progress. He’s an amazing surgeon and I am forever grateful for his extraordinary care. 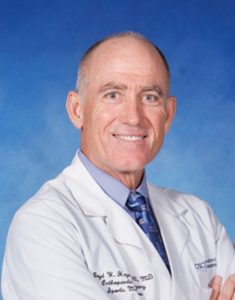 I found it harder and harder to lift my right arm and use it as I needed to. After much thought as to the trade off between a poorly functioning arm and major surgery, I decided to consult with Dr. Boyd Haynes.

He and his team of professionals did a thorough examination and laid out the rotator cuff surgery I would need and fully explained the recuperation processes.

The surgery went well and I followed Dr. Haynes instructions for my physical therapy to the letter. I can say that following the PT regimen has accounted for my rapid recovery and 100% use of my arm — without pain.

I can’t say enough good things about Dr. Haynes and his team and can wholeheartedly recommend them to everyone. 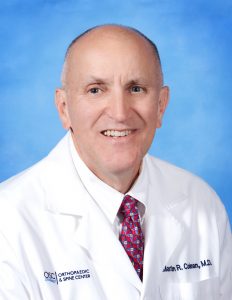 This is my second shoulder that Doc Martin Coleman has repaired for me and I have been thoroughly satisfied both times. 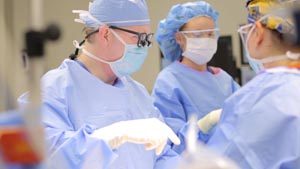 Around 1982, I injured my lower back while moving heavy furniture. For the next 23 years the same part of my lower back continued to be periodically susceptible to debilitating re-injuries and frequent pain, but I always managed to get back on my feet with the help of anti-inflammatory medications and physical therapy.

Then in the Spring of 2005, I re-injured it yet again, this time much worse than previously. Within a very few days, I regressed from using a cane, to crutches, to a walker, to being bed-ridden. Diagnostic imaging experts at the Orthopaedic and Spine Center determined that my pain and paralysis were being caused by a severely herniated disc which was pressing against my spinal cord. They assured me that surgical intervention was only considered for cases that could not be successfully treated by non-invasive means, such as anti-inflammatory medications or physical therapy, and they scheduled me for immediate surgery to stop the condition from worsening, and to correct the problem. The surgery was skillfully and meticulously performed by Dr. Jeffery Carlson through a small incision, and the moment I woke up in the recovery room I was free of pain and fully mobile.

In the 13 years since the surgery was performed, my back has remained strong and free of pain. In spite of returning to some very challenging and strenuous activities, which include mountain climbing, lumber-jacking and heavy construction, I have had no recurrences of the back injury. Below, I have inserted an exact copy of the message I sent to a friend in 2013 (8 years after the surgery), in response to my friend’s inquiry about the long-term outcome of my 2005 back surgery:

Thanks for asking about my back surgery. It continues to be a total success; there has not been any recurrence of pain or immobility since the surgery fixed the problem on March 25, 2005. The orthopedic surgeon’s name who gave me such excellent help when it was urgently needed is Jeffrey Carlson. Since that back surgery, Dr. Carlson has also repaired some damage to my right shoulder, fixed some mysterious condition that had caused fluid to build suddenly on my left knee, and later he put my broken left knee-cap back together in an unrelated event. (If you ever want to know the definition of real pain, women will tell you it is childbirth, but I suspect that probably only applies to those who have not also broken a kneecap.)

Anyway, none of those other repairs have required any surgery; Dr. Carlson says he only resorts to surgery when another treatment won’t cure the injury. About a year ago [i.e., around 2012], I read in the paper that Dr. Carlson has now become the Chief of Surgery for Mary Immaculate Hospital. I haven’t been hurt since his appointment to that post went into effect, so I am not sure whether he still does bone and joint work with his own hands. [Yes, he does.] But he’d be the first person with whom I would inquire if I ever get hurt again; the man is brilliant, pragmatic, compassionate, and competent. 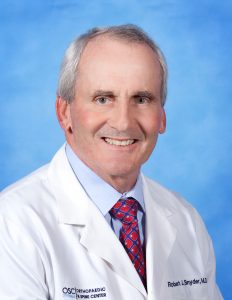 Dr. Bob Snyder did such a great job repairing my right shoulder, that I asked for him by name when I needed care for my left shoulder. I couldn’t ask for better care. He and his staff are top notch!

At the moment, I can’t think of anything you can do to improve your service.  I always look forward to the complimentary hot chocolate, and the kiosk for check-in is also very nice! 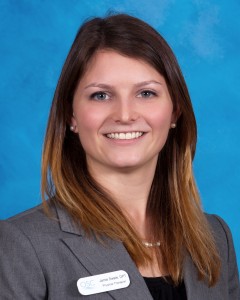 I would highly recommend the physical therapy program offered at the Orthopaedic and Spine Center. The staff there is extremely professional and friendly. My Doctors, Swale and Osowski, PTA Bill and PT techs Maria and Jamie, were outstanding in helping me achieve a better quality of life when using my left shoulder.

Their advice, knowledge of the injury and what exercises to prescribe, to strengthen and heal the shoulder, allowed me to reach my goal in a minimum amount of time. I would strongly recommend each of them to anyone wishing to recover from shoulder surgery.

I want to wish all of the staff a Very Merry Christmas and a Happy and Healthy New Year. 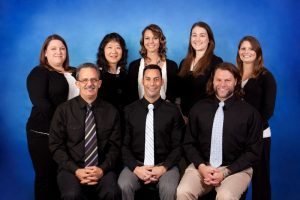 I went to the OSC Physical Therapy Center when I had my knee replacement surgery and the Therapists there were so great, I knew I wanted to go there when I had my shoulder surgery for my broken shoulder.

As I expected, everyone I saw there helped me get more movement and less pain and more strength in the time I was there. Tom Toothaker, Jamie Swale, Victoria, Bill, Heather, and all the other assistants I saw were AWESOME!

A special thanks to “Wolverine” for the help with my good arm after a nerve was bruised from a needle while having my blood drawn at a different doctor’s office. I forgot his real name. LOL.

But if I ever need any therapy again, I would choose OSC Physical Therapy without any hesitation. They are great, and most of all effective!