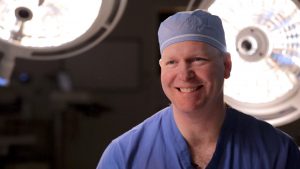 I think the day my back problems started was sometime in 1997, when I bent over and picked up a gallon of bleach on the bottom shelf in the grocery store, and all of a sudden, I felt a pop in my back and it started hurting. I got home and for the next few days, laid on a heating pad.  My back was still sore, but I handled it and went on with my life.

In February of 1998 – I was driving in my car.  As an outside Sales Rep, I drove a lot to visit clients.  Back in those days, I carried a phone book so I could look up numbers and addresses.  Standing beside my car and bent over inside of the back seat, I was lifting the phone book to look at it, and all of a sudden, my back felt as if it was being wrung, like you would wring a towel. It was sudden horrible pain.  I managed to get back in the car, but soon I couldn’t get out of the car.  I called my wife, she called the paramedics and they got me out of the car and took me to the hospital.  I was diagnosed with a lumbar sprain.  They sent me home crawling, but by the next day, I could walk.  In about a month, I felt better, pretty much normal.  But about a week after that, severe leg pain started, that went down my left leg. I had never experienced pain that bad… I am talking g-u-t wrenching pain, so bad I considered taking a chain saw to cut off my leg.  I would do ANYTHING to get rid of this terrible pain.

I tried chiropractic manipulation, but it didn’t work. Physical Therapy didn’t work. I had two Epidural Steroid Injections.  They didn’t work and the last one made my pain worse.  In desperation, I went to a Physiatrist/Pain Management doctor, who ordered an MRI.  My results showed a ruptured disk at L4-5 that needed surgery.  So, in order to get rid of the pain, I had a micro discectomy in August 1998.  I felt much better right afterward and felt really good for about a year.

I took a trip to Lake Tahoe for vacation.  I was brushing my teeth, standing in front of the mirror in the bathroom.  I coughed and the pain came back, down my leg.  Flying back to Virginia was a nightmare and I had to sit in one position for five hours to make the pain bearable.

I went back to the doctor, who couldn’t believe it, but he confirmed that I had re-ruptured my disc.  I had another micro discectomy in 1999.  After that, I was very careful to walk, do back exercises and I did great for many years.  Then I got lazy, stopped exercising and put on weight.

Fast forward to 2007 and the pain started coming back.  It was gradual, but I didn’t want any more surgery.  I went to see my Family doctor who ordered an MRI.  I was then sent to a Neurosurgeon who told me that he didn’t see anything much on the MRI and that any back surgery would only have a 70% chance of success.  I didn’t like those odds, so I bought an inversion table, started exercising again and within 2 weeks, my pain went away.

Fast forward again to 2015, my wife had started seeing Dr. Jeffrey Carlson for her knee and began getting cortisone injections for her hip bursitis. I came to the visits with her and got to know Dr. Carlson.   I remember thinking to myself…  If I ever have a back problem, I am going to see Dr. Carlson.

In October 2016, I went golfing.  A week later, I started having that same old terrible leg pain.  Yes, I had gotten lazy, so I started the exercise regimen again, thinking the pain would be gone quickly.  After three weeks, the pain was getting worse, not better.  My old routine wasn’t working this time.  I made an appointment with Dr. Jeffrey Carlson.

Dr. Carlson talked to me and suggested I get an MRI.  I had it done at OSC and it was very convenient. All I remember thinking was… I don’t want a fusion. Anything but a fusion surgery.  When I met with Dr. Carlson to go over the results of my MRI, he said “You have a blown disc, and what we need to do to fix this FOR GOOD, is do minimally-invasive surgery, and I am going to remove that disc and put in two rods and screws to stabilize the bones.  You can leave the hospital and go home the same day as your surgery. Recovery will take six weeks.”  I couldn’t believe my ears.  Recovering from my previous surgeries had taken that long and they were nowhere near the magnitude of a fusion.  However, I have an old saying “If it is not the easiest decision you’ve ever made in your life, don’t do it.  You will know when it is time.”  I was ready.  I didn’t want to have a fusion surgery, but I couldn’t take the pain any longer. I scheduled the surgery.

Everything about the surgery went as Dr. Carlson told me it would. I woke up from the lumbar fusion surgery with no more leg pain.  I went home that evening of my surgery.  I took my pain meds for about a week.  I wore my back brace.  I did what Dr. Carlson told me to do, by the book.  It was amazing how good I felt and how quickly I recovered.  I was driving my car again at three weeks.

It is now 5 months out from my surgery and I am doing great.  I am so grateful to Dr. Carlson.  He is a wonderful doctor and I highly recommend him!