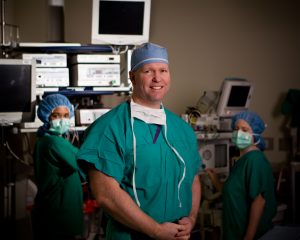 I injured myself while pulling back my crossbow. It caused a horrible pain in the back of my shoulder that radiated into my left arm. I went to my PCP and he prescribed prednisone and a muscle relaxer. After a week, the pain was about the same. A friend suggested I see Dr. Jeffrey Carlson.

I met with Dr. Carlson and told him what had happened. He said it sounds like I had a ruptured disc in my neck and may need surgery. I had an MRI on October 25, 2017 and a follow up with him on November 2. By then the pain had completely gone away. I thought I was home free until he told me I did have a ruptured disc, that it was pressing on my spinal cord and I needed immediate surgery or  risk being paralyzed in the event of a bad car accident. Obviously, not what I wanted to hear, but made the decision at that moment to have the surgery.

I had the surgery, known as a Cervical Discectomy, on November 8th. It was an out-patient procedure . In simple terms, the soft tissue between the vertebrae is removed, a bone graft is used to support the vertebral bones and a small plate is screwed in to support the spine.  After 6 days, I was completely pain free. Other than a small incision in the front of my neck, I could not tell I even had surgery.

I had a follow up with Dr. Carlson on November 20th. He said I could resume my regular duties but not to lift more than 20 pounds. After another follow up on December 21, all restrictions were removed. After first meeting Dr. Carlson, I was talking with my neighbor. I told her about my injury and she said “you need to see Dr. Carlson”. I believe she had spinal fusion surgery. She had nothing but good things to say about him. I highly recommend Dr. Carlson.