Virginia’s Bone Setters 55+ Men’s Volleyball team has a not-so-secret weapon that their name gives away- they have an orthopedic surgeon on the team.

Dr. Boyd Haynes has been playing with the same group of guys around Newport News since the mid-1990s. At the time he had started a company making volleyball wear called Bone Setters, and the team adopted the name when Boyd sponsored them.

“The company went by the wayside, but the name stuck,” he says.

The team members have all played together more than 20 years, some for nearly 30. “For a lot of us, this is the only team we’ve played on,” observes team coach and co-founder Mike Mather. “Some of us met on the beach in my 20s, and I’m 54 now.”

Some have played back into their school years, but Boyd was a late bloomer. “I learned late, around 30,” he recalls. “All my guys started way before me because I was busy with medical school and residency. After that, I had more time to explore working out.”

Their stability and familiarity with each other provides a big advantage as the team to beat in qualifying play at Virginia Senior Games, and they captured a silver medal in their National Senior Games debut in 2017. The team just missed the podium with a fourth-place finish when they returned for The Games in Albuquerque last year.

However, the Bone Setters will tell you their real advantage is having a skilled orthopedist on the roster. “I’ve operated on every team member except one,” Boyd says with a mild chuckle. “ACL tears, Meniscus tears, and rotator cuff injuries are most common in the volleyball world. We just treat ‘em and get ‘em back playing on the team.” 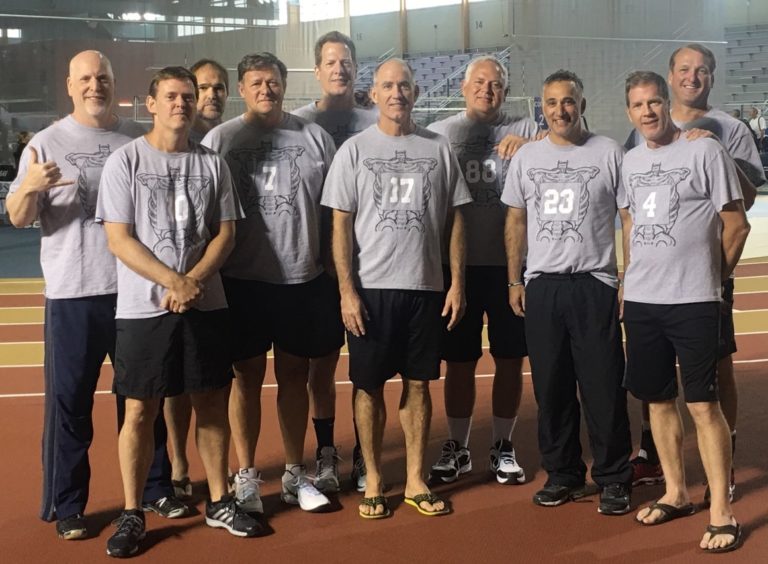 Mike, who referees volleyball in Virginia high school play, has been tended to many times by the team doc, including having both hips replaced. “The first was done after the Games in Birmingham in 2017, and the other one went out before the 2019 Games,” he says. “I couldn’t even finish a match in qualifying. But Boyd put the other hip in, and three months later I was playing in Albuquerque!”

Beyond orthopedics, the team relies on Boyd’s counsel on overall fitness and health. “I don’t know how we would get by without him,” Mike says. We take every ache and pain to him and he keeps us going.”

In Mike’s case, he jokes Boyd has a selfish interest. “I’m the setter and he’s the hitter. If I’m not setting, he’s not hitting, so he definitely wants me out there.”

Boyd also helps his players understand how to adjust play as they age to help avoid injury. “When you’re young, you can pretty much do whatever you want, but once you get older you have to understand the cost to benefit ratio on taking risks,” Boyd explains. “You have to look at the long picture. I try to guide them in the right direction to where they still can play and be as competitive as possible, physically and mentally.”

The team is excited that the 2021 National Senior Games presented by Humana has added Beach Volleyball to the schedule. “A lot of us will be thrilled to play that too,” Mike says. “We’ll just extend our trip to Fort Lauderdale and play one and then the other.”